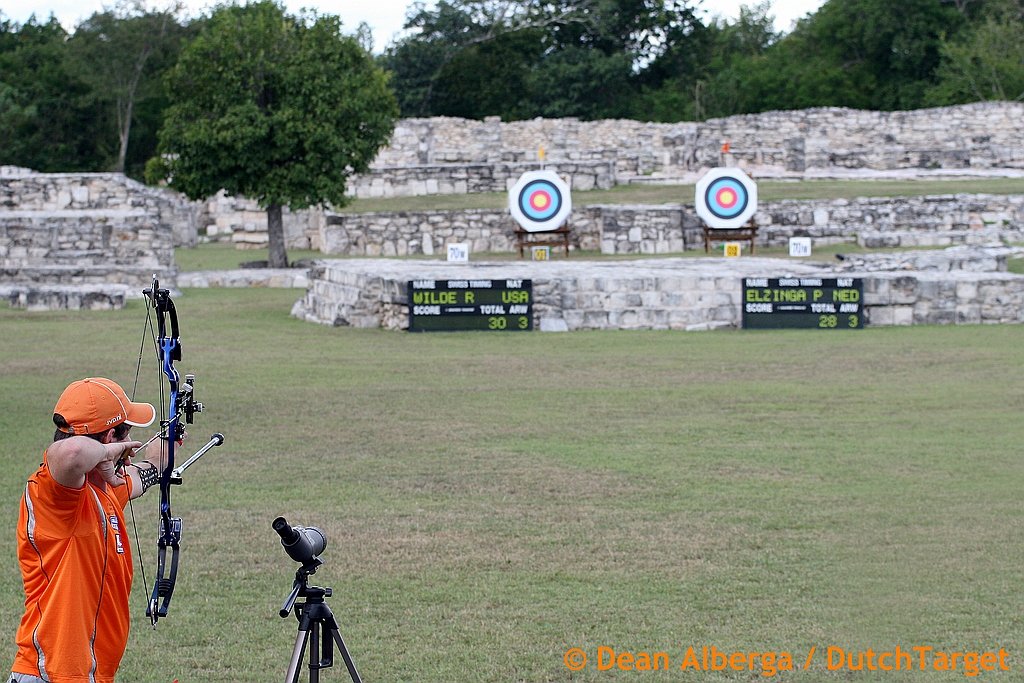 The compound bow has been a game changer ever since its introduction in the late 1960’s. It relatively quickly gained acceptance for bowhunting and for American recreational archery.

However, it took more than 20 years for compound to be accepted at the global levels of the sport of target archery.  Target compound, in the context of World Archery, took 20 years to be established, and now has a 29-year history.  It has now been accepted at every level of competition worldwide, with one prominent exception-  it still isn’t in the Olympic Games.

Resistance to the compound for world level competition was finally overcome in the early 90’s, after an effort from then FITA president Jim Easton to include the discipline at world level events, beginning with the first World Indoor in Oulu, Finland, in 1991.  Outdoor adoption took a bit longer, with the first World Outdoor event to feature compound taking place in Jakarta, Indonesia, in 1995.

Notably, American archers dominated both of those early events, as well as several subsequent championships, because of the substantial head-start through decades of use and understanding of the bows in USA domestic events.  Outside the USA, compound understanding was relatively weak, due to the fact that it was not accepted for world competition.

Later, in alignment with the changes to recurve competition, compound was contested at 70 meters only.

Over a decade ago, as World Archery sought to explore introducing an Olympic Games compound competition, a decision was made to create a competition round that would further differentiate the compound discipline from recurve.  This need for differentiation was driven by the fact that the International Olympic Committee would only consider bringing compound into the games if the round were truly different from the recurve round.

World Archery instituted a differentiation commission, consisting of top competitors, officials and other experts, to work on creating a round that would be different enough from recurve to satisfy the IOC, and yet provide a showcase for the accuracy and mental discipline required for top level compound competition.

Driven mainly by the top-level competitors on the committee, the commission arrived at what they thought would be a good solution- a hit-or-miss format, on a reduced size target, with a 10-centimeter yellow “hit zone”, at 50 meters distance.  The first events featuring this round took place in 2010. 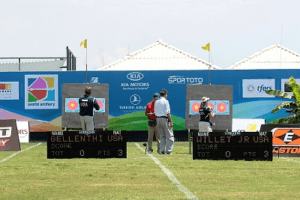 One thought behind this round was that the shorter distance would make it easier to find venues for events, and it was also thought that the hit or miss aspect would be fast moving, interesting, and easy to understand for spectators and media.

Unfortunately, it didn’t work out that way– for one thing, a hit dead center, and a hit barely catching the line had exactly the same value, blurring the reward for accurate shooting- and it turned out audiences didn’t like the spectacle very much.  Audiences really appreciate high scores and close contests- but the hit or miss round tended toward blowouts- inducing outright target panic in otherwise high performing shooters- and the “hit or miss” score itself wasn’t very compelling.

To its credit, World Archery was relatively quick to respond to the issues, and after a couple of seasons, the “hit or miss” round was dropped and changed to the round we have today- still 50 meters, but on a 6-ring, 80 centimeter target, with an X-ring, with 72-arrow qualifications and 15-arrow rounds in head to head eliminations.  This rewards accuracy, provides for audience-thrilling high score potential, and keeps the convenience aspect of the shorter distance in terms of finding venues for events.

This, too, however, was criticized by some shooters- “too close”, “not challenging enough”, “too easy to shoot a perfect score” were (and still are) some of the criticisms commonly expressed in top circles.

Now, there is renewed momentum in World Archery toward creating a new compound round that would be accepted at the Olympic level by satisfying the International Olympic Committee’s requirements:  for differentiation, wide spectator appeal, low added cost, and perhaps also address some of the complaints of top competitors about the current round.

This new momentum is because of the possibility that compound archery could be accepted as an additional event for the 2028 Olympic Games in Los Angeles. 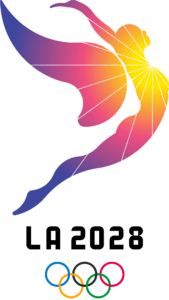 2028 L.A. Olympic Games will be the first chance for a compound round in the modern Olympics

The door to this possibility opened with the adoption of compound in the various continental level games- such as the Pan American Games, European Games, and Asian Games.  Also, the World Games now emphasize compound competition.

This has led to high growth in compound competition, especially in places like Asia, where there was very little adoption of the discipline before Asian Games inclusion, because continental and Olympic events are the only ones that generally receive government or corporate support (The USA is one of only a very few countries with no direct government support for Olympic and world sports).

Once the compound was added to all the continental level events, development as well as government and corporate support followed, so that now we see countries like Korea, Chinese Taipei and India fielding top-class compound competitors. 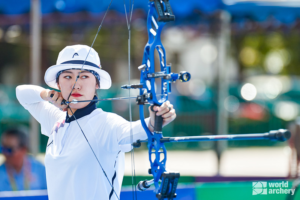 But there are a number of challenges that will still have to be addressed in order to make this possibility of Olympic compound become a fact.

First, and perhaps most importantly as far as the International Olympic Committee is concerned, the number of women participating in compound has been identified as an area that needs improvement.  The growth of compound has included women, to be sure, but the IOC has gender parity in terms of numbers as an important goal, and there is still a lot of progress to be made in that area.

Another worry is the impact that compound may have on Olympic recurve.  Some people- mostly recurve shooters- are concerned that adding compound would come at the expense of recurve at the Olympic Games.

That’s not so, according to World Archery Secretary General Tom Dielen, who told us “It’s absolutely an issue of adding medals, not replacing medals.  We see it in the spirit of what has happened with volleyball, where you have indoor volleyball, and beach volleyball, two complimentary products to the Olympic Games, and we also want to have complementary products for the Olympic Games.  And will that be in the current format, (or) another format, only time will tell”.

But what form would a new compound round take in order to be accepted for the games?  Tom Dielen says there are several options on the table.  “One is the current format, but at a longer distance of 60 rather than 50 meters.  Another is an indoor Olympic Games round.  And a third option is a field course of some kind”.

It’s noteworthy that the final decision on any potential Olympic Compound round won’t actually be up to World Archery.  It’s up to the IOC.

As Tom explains: “It’s not going to be our call, I want to make it very clear it’s going to be the call of the International Olympic Committee, together with the (Olympic Games) organizing committee.  What fits best in the strategy of the Olympic Games, because if it doesn’t fit that strategy, there is no chance of adding it.  It has to fit in the strategy.  That means re-using a venue the best way possible during the Games”.

It also means staying in a tight budget for the event, in the “new normal” of tightly controlled costs for the Olympic Games.

There will be a lot of work to do over the next two years to formulate new proposed rounds and changes to the sport to open the door to Olympic Compound, increase generally equality in the sport, and there’s also the possibly there could be some future changes to current competition rounds in recurve as well.

First on the agenda, is a general review of target faces and precision potential for different rounds, being conducted by the coaches committee and statisticians who are experts on the subject.  In fact, this analysis is also looking at possible adjustments for recurve targets as well.  The goal for the effort is to have recommendations by the 2021 World Archery Congress.  So the possibility of a new compound target to go with a possible 60 meter round exists- as does some kind of new recurve format.

One concern Tom expressed involves how any new round could affect club level and mid level shooters- WA is very concerned with making sure any changes don’t adversely impact up and coming shooters as well, which is why very careful consideration and research is being carried out, and there will be extensive discussions at every level of World Archery.

One thing is for sure- change is coming.  And if a compound round is accepted for the 2028 Games, it will clearly be the most significant new development in what will, at that time, have been the 56 year history of modern Olympic Archery.