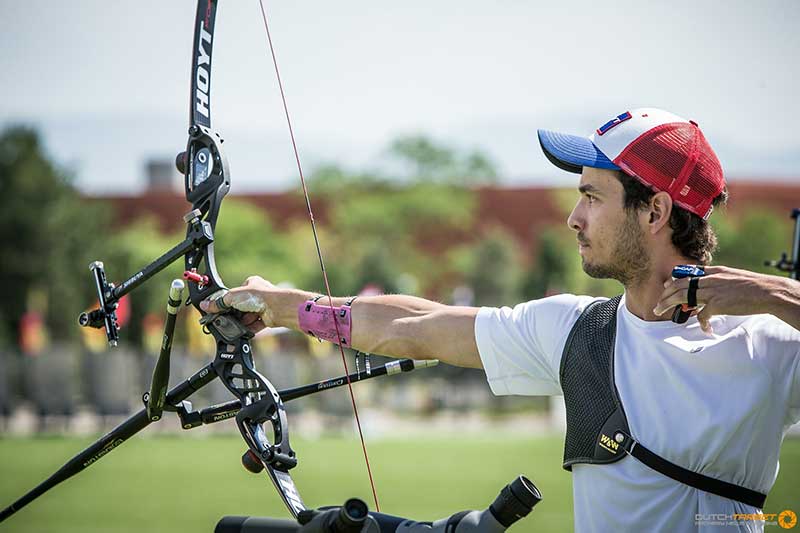 There are dozens of options for stabilizer selection for recurve (and compound) bows, in literally thousands of different combinations. It can be very confusing! Let’s take a look at the general trends and goals of top shooters choosing specific stabilizer configurations, specifically for recurve.

As we look at this in more depth, we can note that there are generally two different schools of thought- roughly, we can describe these as “stiff and light”, and “stiff and heavy”. Either way, “stiffer” stabilizers dominate the current market and are universally desired by shooters on both ends of the mass weight question.

“Plan A”- Light Weight and Stiff
In terms of sheer numbers (and podium wins) the most winning combinations have long been in the category of relatively low mass weight and high stiffness stabilizers for recurve shooters.

Dating back to around 1987, the advent of widely available, high-stiffness carbon rods for stabilizers changed the game for many shooters, helping reduce the natural aiming float and providing for greater inertial stability of the bow during launch with relatively lower mass weight.

To this day, setups ranging from 24-30 inch front rods, 3 to 6 inch extensions, side rods between 9 and 12 inches attached to V-Bars set between 35-45 degrees, V-bar drop angles from 0 to 30 degrees, and mass weights of about 4-6 ounces on front rods and 3-6 ounces on each side rod describes 100% of successful (winning) stabilizer configurations going all the way back to the 1988 Olympic Games, and the original Easton A/C stabilizers used by 1988 Olympic Champion Jay Barrs.

In other words, practically without exception, every individual Olympic Gold Medalist, both male and female, since the Seoul Games in 1988, has used a stabilizer system fitting the above description.

One of the main advantages of a lighter mass system includes clearer shot-to-shot feedback from the bow (which is cited as a particularly important criterion by many top archers), potentially better handling in the wind (because it’s easier to get a lighter bow back on target after being pushed by the wind) and not least, less potential wear and tear on bow arm shoulders.

“Plan B”- Heavy Weight and Stiff
Until the advent of American champion archer Butch Johnson at the 1992 Olympic Games in Barcelona, relatively few successful shooters used higher mass weight stabilizers. But, coming from compound to recurve, Butch sought out a system that would make the bow react more like his compound bows. Among other things, Butch used a (relatively) very heavy back weight of up to 8 ounces mass, combined with a 30 inch Easton A/C/E front rod with, at times, another 8 ounces of mass weight.

Combined with his somewhat longer aiming cycle and “quiet” follow through, the current trend among some high level shooters to go for heavier overall mass systems can directly be traced to Butch Johnson’s success through the 1990’s with higher mass systems.

Perhaps the most prominent shooter using a higher mass system today is Brady Ellison. Brady, a former junior World Compound champion, uses a shot cycle that has some marked differences from the Korean/Tone style, including a definite “hold” pattern in the shot that’s dedicated to aiming and which reflects specific technical aspects of USA Coach Kisik Lee’s shooting philosophy. The higher mass in this system can contribute to a lower amplitude aiming pattern. Obvious downsides include the need for high levels of physical strength and careful attention to shoulder injury prevention, owing to the higher mass weight, which easily can be double that of the typical Korean style stabilizer system.

Obviously both types of systems can work exceptionally well, but it’s noteworthy that nearly every world record, and every individual Olympic Gold, has been dominated by the lighter mass option.

Product choices
Shooters looking for overall highly stiff systems carrying lots of weight (“Plan B”) are well served by Easton Z-Flex, Contour CS, and Halcyon stabilizer systems. These stabilizers are stiff enough to prevent excessive oscillation from the high mass weights at the ends of the stabilizers, and also manage post-shot vibration, which can be important for injury prevention and long term shooting comfort. These stabilizers, like all current Easton stabilizers, natively support 5/16-24 disc weights, which are popular due to reduced length required for a given amount of mass.

Shooters looking for a lighter solution (“Plan A”) are best served by lighter stabilizer rods, like the Contour, Contour CS, and Halcyon stabilizers. These lower mass rods increase the effective inertia of the more moderate mass weights that are used in lower-mass systems, and are fully compatible with the smaller diameter (1/4-20 thread) Easton Vari-Weights that have been the recurve benchmark for decades, using the included 1/4-20 Easton weight adapter that comes with every Easton Contour and Halcyon series stabilizer.

Z-Flex stabilizers are extremely stiff, but also larger diameter and have more mass weight than some other choices.  The Contour CS rod is slightly less stiff than the Z-Flex, but has a higher stiffness to weight ratio.  The regular Contour is about 30% less stiff than the Contour CS, giving it feel that’s favored by many mid-draw-weight recurve shooters.  Finally, the all-new Halcyon is the ultimate for stiffness to weight, and smallest overall diameter, and is even stiffer than the Contour CS.

Easton strongly recommends working with a qualified archery coach to determine the best fit for a beginner or intermediate recurve shooter, because individual form has so much to do with optimizing stabilizer and component selection.