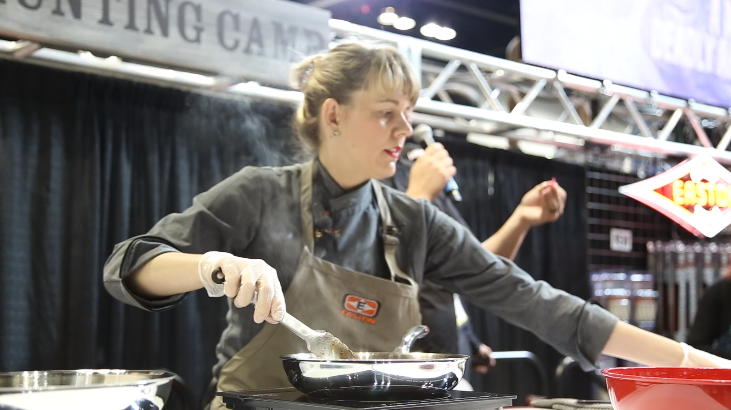 I like to cut the inside tenderloin out of a deer I have shot when gutting the deer. These are located on the inside of the body cavity next to the spine just forward of the rear leg joints.  In a typical deer, this amounts to just about two pounds of meat, but it is the best two pounds on the entire animal.

I cut the inside tenderloins out immediately when gutting the deer and place them in a small ziplock plastic bag that I carry in my pack just for this. Let them cool thoroughly.

At home, I clean them in the sink to remove excess blood and other tissue, leaving just the meat.

But the tenderloins into thumb-sized pieces and wrap them in short strips of bacon using a toothpick to hold the bacon in place.

Put these small bacon-wrapped delicacies in a container with your favorite marinade.  We have used several, but like the A1 Steakhouse marinades.

Let marinade for a few hours (two or three) and then place on the grill.

It is important to cook the pieces very fast on high heat – even flame.  You need to get the bacon done on the outside without overcooking the venison inside.   Venison is best served rare and this meat especially is ideally cooked fast and hot.  Cook the bacon fast and then get it off the grill.

Serves 4, as an appetizer

Cut bacon in half crosswise to make two pieces of bacon from each strip.

Mix all ingredients for marinade in a bowl and add tenderloin pieces, cover and refrigerate for 2 hours (up to overnight). Drain marinade from meat and wrap each piece of tenderloin in bacon and secure with a toothpick.

Heat a non-stick skillet over medium-high heat and cook the venison bites in a single layer, turning every couple minutes to cook the bacon until crisp. Serve and enjoy!