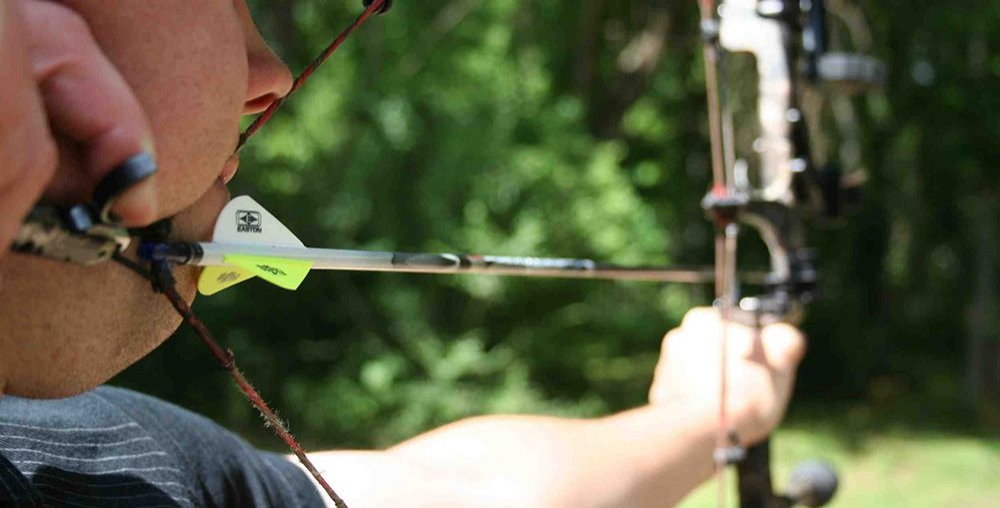 One of Fred Bear’s more famous quotes is, “Nothing clears a troubled mind better than shooting a bow.” We couldn’t agree more, and while a session at the range does clear out the cobwebs, sometimes a change of pace different than draw, release, repeat… is good for us. Here are some ways to make your archery practice more social, fun and maybe even more effective.

Turn it into a Game

Everyone has at least one competitive bone in his or her body. Has your wife or best buddy been trash talking about how much of a better shot they are? Tell them talk is cheap and to meet you at the archery range to find out who really is the better archer. Turn one of these classic games into a fun archery contest with your family and friends.

From the knees, nothing but heart. You probably played horse at the basketball court, but it can also be played with a bow and arrow. Set up a ring target, or 3D target. A shot in the hoop or vitals counts as the “basket.” The first shooter takes a shot from any distance, angle and/or position. If the shot hits the ring or the target, the second shooter has to try to make the same shot from the same place and using the same style. If shooter two makes the shot, then shooter three (or shooter one if you only have two players) attempts the same shot until someone misses. The first person to miss gets a letter, starting with “H.” When a shooter spells “Horse,” he or she is out of the game.  The last person standing wins.

Bowhunting Advantage: This game will test how well you shoot from different angles, positions and anything else your opponents are creative enough to challenge you with. For example, if your rival finds your weakness is quartering away shots from a seated position, think twice before taking that shot in the field. Remember, safety is most important, so don’t get too crazy with the trick shots, and always be sure it is clear down range before nocking an arrow.

Or should it be called “nock out?” Distance is king in this archery game. Each archer starts at 10 yards and takes a shot. If a shooter fails to hit the ring or vitals on the target, they are knocked out. The survivors back up another ten yards and shoot another round of arrows. This continues until one person remains. If all remaining players fail to hit the target at the same stage, the person closet to the mark wins. Make it fun by having the losing persons retrieve the arrows between each round.

Bowhunting Advantage: Get to know your maximum killing range. If you find you are rarely in the game after 50 yards, then work on your long distance accuracy or don’t take the shot at an animal in a hunting situation.

You can print paper targets in the shape of a dartboard or with playing card symbols. The dart game follows the same rules as a traditional game of darts. To play archery poker, shooters each take a shot for five rounds. Once a shooter hits a card with his or her arrow, no one else can hit it. After five rounds, the player with the best “hand” wins.

Bowhunting Adavantage: Instead of simply hitting the ring, you have to be dialed-in and hit very small targets to win. This will help your accuracy out in the field.

Have a hunt out west coming up this season? Get in shape with an archery obstacle course. The design of the course can be as challenging as you want it to be (maybe you have to crab crawl between stations or run backwards). Set up five targets around your yard with a challenging exercise between them. Run the course, stopping at each target to take a shot. Time yourself and penalize yourself for inaccuracy (for example, add two seconds for each ring the arrow is from the bullseye). You can play against yourself, trying to beat your high score, or against friends. Add a few interesting targets such as the Delta McKenzie Zombie, Dragon and T-Rex 3D targets to feel like your survival depends on your accuracy.

Bowhunting Advantage: If you set up your course in a manner that challenges your cardio, you will be exercising your heart and lungs at the same time as your shooting muscles. And really, there’s no higher-pressure situation than shooting at a Zombie, is there?

Keep your bow in the garage and stick a target down your driveway or place it in the backyard. Use an arrow with the broadheads you will be hunting with. Arbitrarily pick a spot and walk to it. Can you make the shot? The only way to find out is to try.

This simulates a real hunting situation. One where you will need to guess yardages, compensate for angles, obstructions and even weather conditions. Sometimes it’s ok to say, “No, this is not a shot I would take,” and walk around again to reposition yourself.

Bowhunting Advantage: We don’t get second shot opportunities in the wild. Put yourself in the mindset that this is an once-in-a-lifetime shot on a trophy elk, deer, moose or anything you have a tag for this fall. When you have one shot to make the kill, can you do it?

Archery is a sport, and practice makes perfect, but don’t fall into the same routine and only master the 20-yard broadside shot. Introduce competition and different shooting situations to push yourself, identify your weaknesses and become a better bowhunter.

What arrow should I shoot?