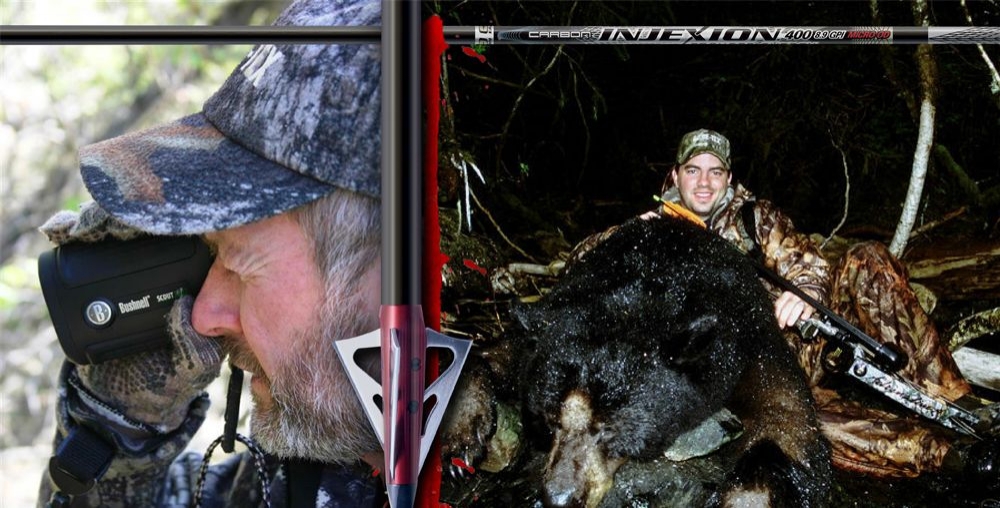 Bears are tough. We all know that. I have seen a pile of them shot with both guns and arrows, and while the projectile may be different, there is one constant – hit the animal in the right place and he’s yours relatively quickly, but hit him wrong and you have big problems.

Here’s but one example. When I was guiding black bear hunters in Southeast Alaska, we had a client from Wyoming who talked big about all the game he’d killed over the years. We found a really good bear feeding on a beach, and snuck within 25 steps without the animal knowing we were on the planet. The bear turned broadside, and Hotshot proceeded to shoot the animal a bit high and a bit back. He didn’t miss the sweet spot by much, maybe just six inches or so, but that was enough. The bear rocketed off into the nearly-impassable old growth forest. The blood trail was virtually nonexistent and how could we follow tracks, there were virtually none that were easy to see. Since it was late in the evening we went back to the boat and were on the beach again in the early morning to see if we could pick up the trail. Thankfully my buddy, outfitter Jim Boyce, is an ex-navy SEAL and has a sixth sense about these things. He looked at the terrain and headed off, while I stayed with the client and tried to find blood.

To make a long story short, Jim found the bear tucked up under a downed log almost a mile away, still alive and snarling, and was able to finish the job. Later we found that the broadhead had passed through the top rear portion of one lung, not both. The bear probably would have eventually died from the wound, and we were lucky to find him.

By the same token, the last of the three giant Alaska brown bears I killed with an arrow didn’t run 20 yards before falling over graveyard dead. He was quartering away from me at 17 steps when my broadhead went in behind the last rib, passed through the liver and both lungs, and imbedded itself in the off front shoulder. As my buddy said at the time, “They just can’t take a lot of that.”

And that’s the thing. Shot placement is everything on bears. First you have to know where to aim, then make sure you skills are fine-tuned enough to make the shot under pressure.

So, where do you aim?

First, one must remember that a bear’s heart/lung area is set a bit lower in the chest than that of a deer, meaning you need to aim a bit lower. Dividing the chest into thirds on a broadside bear, you want your broadhead to hit in the lower two-thirds of the chest. You also need to tuck in tight to the front leg without actually hitting a leg bone as thick and stout as a steel pipe. Ideally on the broadside bear, that front leg will be moved a tad forward, allowing you to place the broadhead into the crease right behind the front leg.

On a bear slightly quartering away from you, I draw an imaginary line top to bottom that would cover the off-side front leg, and this is what I aim for. Doing so will send the broadhead through both lungs. I also do not recommend taking the quartering-away shot if the bear is quartered at a steep angle. This risks hitting the hind quarter – the probable result being a lost bear – and ending up having to pass though a lot of digestive tract to get to the lungs. That’s asking a lot of any arrow. If it doesn’t have the juice to make it, the bear will probably die but your chances of recovery are slim.

I have shot black bears that were slightly quartering to me – with the emphasis on the word “slightly.” These bears were more broadside than quartering and at close range, and it was not that difficult to slide the shaft past but still in tight to the scapula, ensuring penetration of at least one lung and the liver. Bears that are quartering hard to you do not offer a decent look at the vitals, and I pass these shots. The same is true of bears facing right at me, or directly away from me. The odds of a killing shot are just too small to task the risk.

The one exception to this rule is if a bear stands up on his hind legs and looks right at me. I have killed two big black bears this way, aiming right for the center of the chest, aiming for the intersection of an imaginary horizontal line between the shoulder sockets and one that runs directly down the center of the chest meet. You need to be shooting some poundage and a top-quality replaceable- or fixed-blade broadhead to pull this off, and while it may seem like a chancy shot at first glance, it really is very deadly.

If you are hunting over bait, it is important to let bears settle down a bit before taking the shot. Many times they come in a bit skittish, and once they hit the bait they are moving around a lot as they get comfortable. Let them. Then, when they’re satisfied that all is well and have begun to feed, odds are they’ll position themselves for the perfect shot while remaining still long enough for you to precisely place the arrow in the sweet spot. Once you do, remain quiet and don’t fidget around. Let them run off and listen closely to see if you can hear them go down. If there is any question about how good the shot was, wait for at least an hour before following them up.