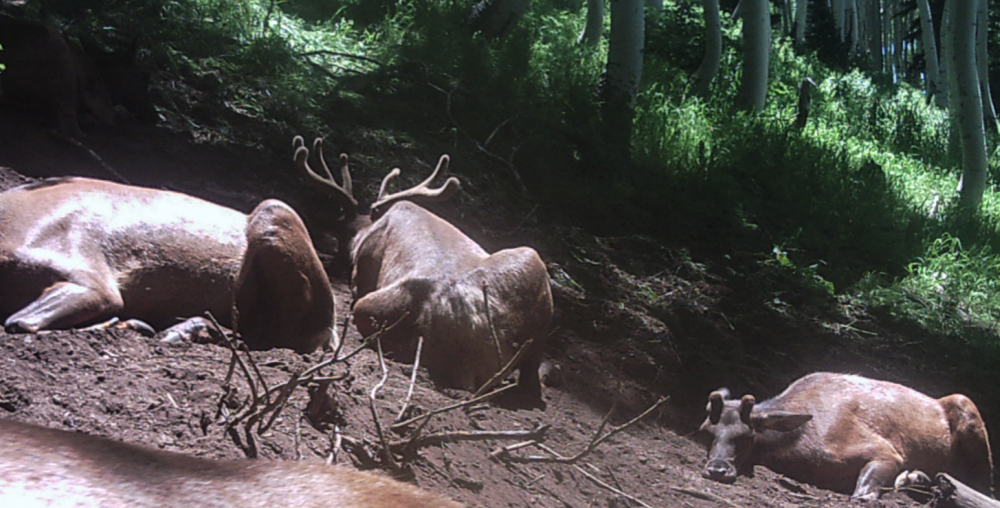 As soon as I found out the results of my elk hunting tag applications in May, I began preparation for the preseason scouting activities.  To be more effective in my scouting trips, I like to have a good idea of where I am going and why I want to go there.  I pour over the maps and Google Earth, looking for the topography and features that will lead me to areas that will hopefully hold game.  As with mule deer, mature bull elk spend their summers segregated from the females in bachelor herds, often times in high open alpine meadows where they can focus on nourishing their rapidly developing antlers.  The cows, on the other hand, form nursery groups, whose primary goal is to rear their newly born calves and to provide the nourishment they need to survive that critical first year.

Because Utah’s season begins in mid-august and is relatively early in the year, I plan to target bachelor herds during the opening days of the hunt, while they are still in their summer range.  Because summer ranging bachelor herds can be quite pattern able, setting up a tree stand over a commonly used game trail or water hole is often a great tactic to employ before increased hunting pressure and the rut changes the elk patterns.

As the season progresses and the bachelor herds disappear, I will have to find the cows to find the bulls.  To prepare for this during summer scouting, I will also be looking for nursery herds of cows and calves as well as identifying areas that held rutting elk last season.  If you can find the areas that hold cows early in the season, even though bulls may not be with them, they can be good areas to target in September as the effect of the rut takes hold.

Also, looking for areas with sapling rubs, last year’s droppings (typically will look like larger individual pellets and not singular clumps), and evidence of wallowing are all additional clues where rutting elk will be present come the rut.

When scouting a new area for summer elk, I initially focus on the top 1/3rd section of the mountain that I am scouting.  The higher elevations tend to have more open habitat and are cooler, which are preferred by the elk.  Also, there are less bugs at these elevations that the elk want to keep away from their delicately developing antlers.   I try to find areas that are away from trails and roads, and that have good cover in pine or aspen groves for bedding that are in close proximity to feeding areas.  I also look for areas on the maps with secluded pine and quaking aspen benches on north or North West facing slopes as elk will often use these benches to wallow, or take refuge from the heat of the afternoon sun.

Topo maps are especially helpful in spotting these areas as the topo lines make finding these benches a cinch.  Last but not least, water is critical.  Unlike high-alpine mule deer, who can get much of the water they need from their browse and the morning dew found on plants, Elk need far more water than plants can provide to keep their large bodies hydrated and cool and so they require a good drink from a dependable water source every day.  In the hot, dry climates of the west, finding the water often times means finding the elk.

I would like to make one additional comment regarding the weather.  Take note as to how harsh the winter was the previous year.  If the winter was harsh and the snow melted late, it is possible that the elk may be in lower elevations vs. a normal year due to the available plant forage available.  Likewise, if the spring and summer are drier than normal, upper-elevation water holes may be dried up altogether, forcing the elk to lower elevations also.  In addition, these factors can also affect calf and elk antler development, which can end up affect the timing of the rut.  A heavy late winter followed by a hot dry spring and summer just might push the peak of the rut a week or two later than normal.  So, consider all this when developing a pre-season plan.  My point to all this is that there are always variables that can effect elk behavior from one year to the next.  So while my general statements are good starting points, successful hunters will pay attention to the clues hidden in the details.  The weather is one such detail.

After applying all these criteria, I identified several potential areas, two in transitional feeding-bedding areas, and another area close to a potential water source that show some promise and are at least two miles walk from the nearest trail or road on either side.  The below image illustrates what I am looking for when evaluating a map.

With some areas targeted, now is time to head to the hills to get acquainted with them, start glassing these areas, placing trail cameras, mineral sites, etc. to prove these areas out.  These scouting trips will be the focus of my next post.

WHAT IS F.O.C. AND HOW DOES IT AFFECT ARROW FLIGHT?

How To Prevent Shoulder Injury In Archery