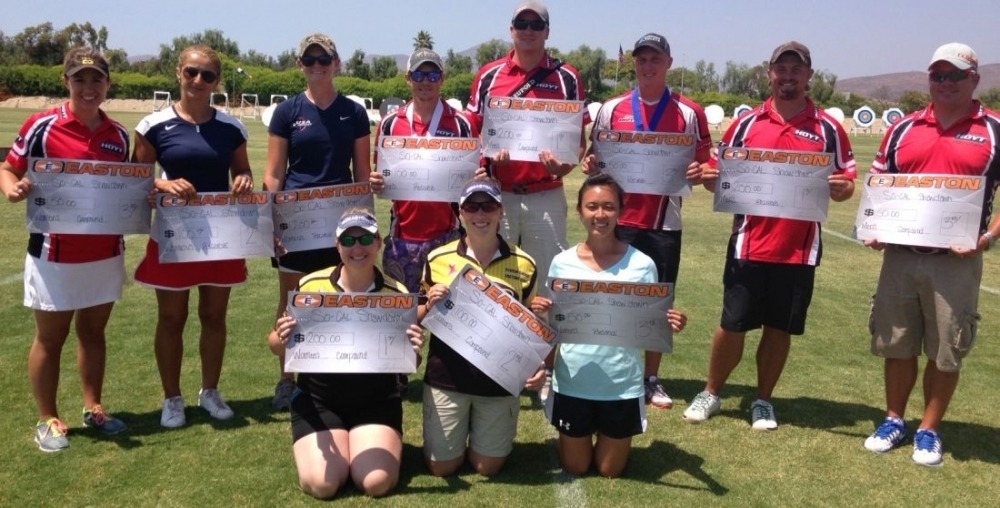 Recurve Women:  McKenzie Brown is showing that she is the woman to beat in the US this year.  She won the gold medal at the Arizona Cup earlier in the year, and she managed to beat the veteran Khatuna Lorig in the Gold medal match to win the SoCal Showdown!  The other medal match had a newcomer, Stephanie Kim, win the Bronze medal and show that she will not be someone to be overlooked in future head-to-head matches.

Men’s Recurve:  Brady Ellison may not have qualified 1st but he was the man to beat in the elimination round.  Brady beat fellow teammate Jake Kaminski in a tough Gold Medal match 6-0.  While resident athlete Sean McLaughlin shot an impressive 30 in the wind to clinch the Bronze Medal!

Women’s Compound:  Erika Jones lead the charge during qualification.  However, she lost her semifinal match that put her in the Bronze medal match against Carli Cochran.  Erika shot strong in the wind to capture the Bronze Medal.  While the Gold Medal match between Sarah Lance and Crystal Gauvin went back and forth with Sarah winning by one point in the final end.

Men’s Compound:  Steve Anderson, equipped with Protours and a long draw length, showed that it helps to have such a great combination in the wind.  Steve shot strong all day and when he got into the Gold Medal match it wasn’t any different!  He built up a big enough lead that enabled him to cruise to the GOLD and fellow TeamE shooter Reo Wilde dominated his match to win the Bronze medal.