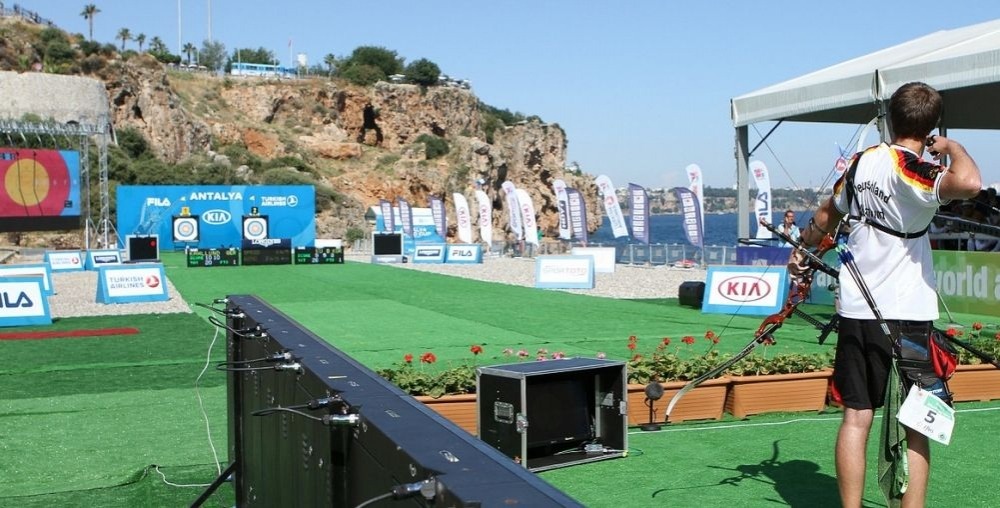 If you’re going to swim in the deep end of the pool in this sport of ours, it always pays to have a backup plan.  That might be the chief lesson of the finals here in brilliantly sunny Antalya, Turkey, where good planning saved the Gold Medal prospects of a young German archer in his first World Cup final.  (It also doesn’t hurt to have the world’s most-winning recurve arrow, Easton’s X10, in your quiver, as did every finalist here today)

When the young German’s arrow rest broke on the last end of matchplay, KAHLLUND turned to his second (bow) for a shoot-off to decide Antalya gold.

Aiming in the bottom right 5/6 – that’s the blue – all Florian KAHLLUND could do was hope. “It was more luck,” he said, after drilling an arrow into the 10 and walking away with his first World Cup stage title.

KAHLLUND qualified in fifth on Wednesday before knocking out reigning recurve men’s World Champion LEE Seungyun during eliminations before lining up against LEE’s teammate KU Bonchan on the Antalya beach arena today.

For both KAHLLUND and KU – a newcomer on the Korean team – it was a first stage final. And it was a gold medal match that needed the full five regulation sets and more to decide.

The German archer jumped to a 3-1 lead before KU evened things up. The pair split the last two sets and the match went to a one-arrow shoot-off.

KU shot first: 9. KAHLLUND, now with spare bow in hand as his arrow rest had broken – the screw came undone and it was a mess – during the previous set, shot second.

He aimed off and somehow put his arrow in the middle.

The unlikely win makes it three World Cup stages in a row with a German gold medal – and puts Florian in a strong qualifying position for the Lausanne 2014 Archery World Cup Final.

Another Korean, CHANG Hye Jin, won the recurve women’s final in convincing fashion. She started with a perfect 30 and didn’t lose a set – although drew two – to the 2011 World Cup Final winner CHENG Ming, from China.

It’s a first World Cup title for CHANG, too – something she said was a “great personal achievement.”

Japan’s Takaharu FURUKAWA and Ren HAYAKAWA won the recurve men’s and women’s bronze medals respectively. FURUKAWA needed a shoot-off – and shot more 10s than any other recurve man in the tournament, winning him the Longines Prize for Precision – Stage Award for Antalya.

Please confirm, if you accept our tracking cookies. You can also decline the tracking, so you can continue to visit our website without any data sent to third party services.