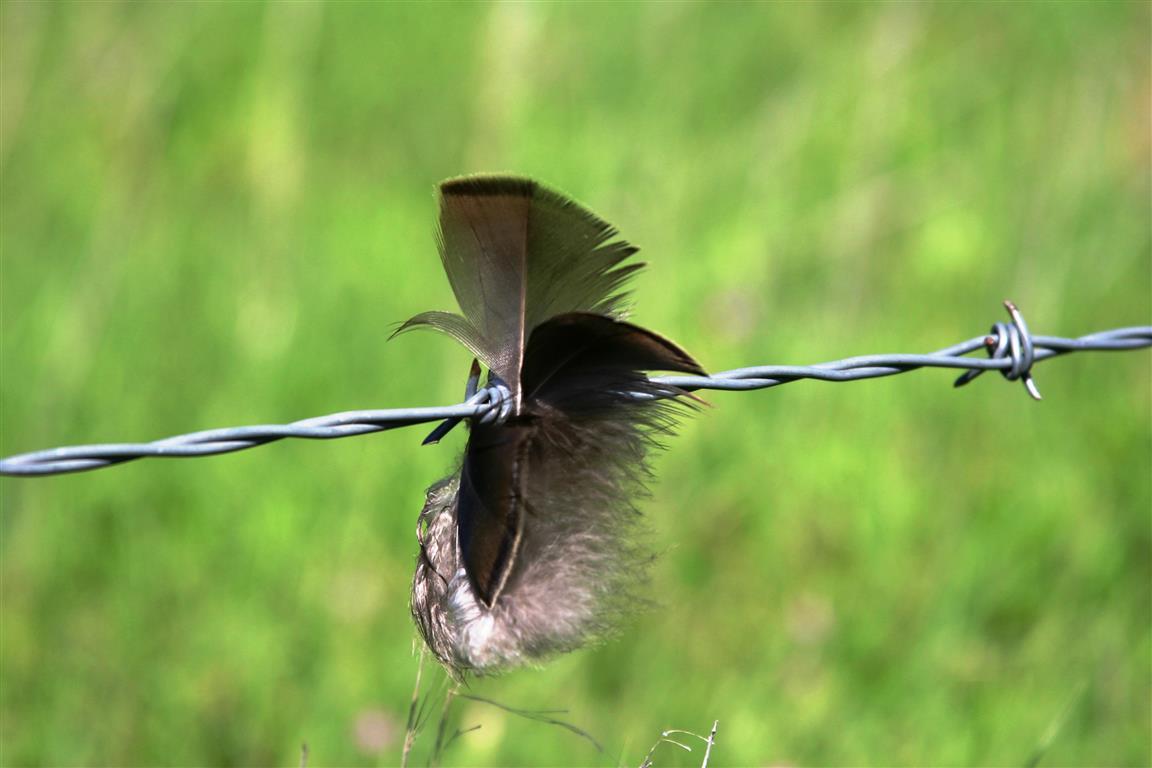 Scouting and looking for signs of where turkeys have been passing through gives you a great idea on where to set up a midday ambush.

It was maybe 20 years ago and I was about as raw a turkey hunter as has ever walked the woods. My friend Bo Pittman and I had everything laid out perfectly. We knew exactly where the turkeys were roosting, we slipped along an old logging road in the dark using the small hills as cover, and got set up within 100 yards of the roost trees as silent as a pair of old tom cats stalking mice. But when the turkeys flew down and the gobbling started, the birds went directly away from us without even giving us a look. After an hour, it was obvious that this spot was history for the moment.

Being a novice turkey hunter at the time, I figured the hunting was pretty much finished for that morning. But one look at Bo – who, at the time, had personally taken over 50 gobblers – quickly squashed that notion. “Now the hunting is going to get good,” he said, picking up the decoys and stuffing them into his vest. “Let’s go get us a gobbler.”

“I’d say we kill about 80 percent of the turkeys we get every spring after the first hunt of the day is over,” said outfitter Ralph Dampman of Trophy Ridge Outfitters in Carlile, Wyoming (www.trophyridgeoutfitters.com), who has been guiding both big game and turkey hunters for decades. “A lot of novice and mid-level turkey hunters haven’t learned that fact. In my experience, in the early morning hours you’ll hear 80 percent of the day’s gobbling, but it’s usually tough to get these birds to come in even when you think you got them wired. That’s because this is the time that they are least likely to come to a call simply because they are trying to get the hens to come to them.

“When you stop and think about it, really about 90 to 95 percent of the day is non-gobbling time,” Dampman continued. “Spring turkeys are active all day long to one degree or another. If a guy gives up because the morning hunt didn’t pan out, his chances of bagging a turkey drop almost off the chart.”

Another believer in “midday magic” is Texas guide & outfitter Stony Trainham. “After 7:30 or 8:00 a.m., the birds pretty much shut it up,” said Drury. “They’re with hens, and busy doing their thing. But they’ll soon be done with those hens for the morning, or the hens will head off to a nest, and then a gobbler is likely to start looking again. That’s when you will have an excellent chance of getting him. I’m not saying that it’s a sure thing, but if you hear a bird gobble, or can make him gobble, you’re in the game. Now’s the time a hard hunter can call a gobbler to him, if he knows how to go about locating birds that want to play.”

There are a couple of ways to attack gobblers in the middle of the day. Here’s what I like to do.

“I believe in a more active style of hunting than most of the people I know,” Trainham said. “If I haven’t gotten a bird to come to me right off the roost and things are moving into the midday period, in my mind it’s time to go find a bird that wants to play with me, and come to my calling. To do this, I cover a lot of ground in as short a time as possible, looking and listening for birds, and trying to make them gobble.

“Most of the ‘old school’ hunters aren’t like this,” he said. “They move a lot slower, cover less ground, and are really more thorough in their approach. My feeling on this kind of hunting is that if there are gobblers there, but they’re not active or won’t come to my calls, why waste my time on them when there might be a more active bird just over the next rise?

Stony said that his actual hunting method is dictated by the terrain. “If it is open country, and I can see out into fields, along hardwood edges, and so on, I like to use my binoculars and glass for turkeys either feeding or strutting,” he said. “This is especially true in Rio Grande turkey habitat, though it works well too on Easterns in certain places.”

“In more closed-in country, or while I’m hiking along listening and looking for turkeys, I like to use a locator call to try and stimulate a response,” Stony said. “If you can get a gobbler to talk to you early on, while you’re still a ways away from him, then you can move in and set up where you want to be, not where his movements and activity level might dictate. Of course, if you call and a gobbler answers from close in, you have to set up and get ready right now, but that’s not the ideal situation.” He also likes to use friction calls during the midday period, especially if it’s windy. “Friction calls can be heard a lot farther away than mouth calls, especially when the wind picks up,” he said.

Once he gets an answer to his locator call, Trainham likes to move in as tight to the bird as possible before trying to get him to come in. “I may try another locator call to see just how hot the bird really is,” he said. “If he answers, I don’t give him much time. I’m on him right now. I do try and get above the bird, or at least on the same elevation as he is, but I like to move in fast.

Strut zones are a key element in midday hunting, Stony mentored. “If you know the country or have scouted before the season, you know where the strut zones are,” he said. “These can be fields, edge cover, lake banks – we often cruise shorelines in boats, glassing as we go – old logging roads, and so on. People should remember that if they’ve taken a bird from a specific strut zone, the chances are good that another gobbler will move in and use it, too. These areas are worth checking on a regular basis.”

Panther in the Woods

“I guess you could describe me as more of a conservative, old-school hunter,” Dampman said. “When birds are not gobbling, as our Merriam’s often do not, it pays to know the lay of the land and set up where the birds will eventually show.”

The key here is to realize that for 90 to 95 percent of the day, turkeys are not gobbling. Thus, it is critical to scout the area, and know both where the birds are roosting and where their strut and feed areas are.

“If I haven’t done any business early in the morning, then I’ll go to an area where I heard birds sound off on the roost, even if it’s a long ways off, or where I know there are usually more turkeys” Dampman said. “I’m going to move cautiously, calling perhaps every 100 yards or so, hoping to get a response. I move as if there’s a gobbler behind every bush or in every hollow. The last thing I want to do is bump a bird and spook it.”

When he gets close to the area where he thinks the turkeys are, Dampman sets up and begins working the turkeys with his calling. “My routine begins softly with feed talk and so on. Then I may move up into some cuts and runs. If I get an answer and it’s a long ways off, I pour the calling on. If the birds are close, I stay soft.

“If I don’t get an answer right away, I don’t give up. I have confidence the birds are there someplace, they’re just not answering me yet,” he said. “So I call every five minutes or so, cutting & yelping, just as if a bird has answered me. What I’m doing is trying to create an interest, remembering that many times a gobbler will come in silently. I’ll stay in one place 30 minutes to one hour before moving on.”

As he moves through the woods, Dampman moves cautiously, looking for turkeys at all times. “I like to glass open fields and known strut areas,” he said. “The first thing a gobbler does is follow the hens to wherever they’re going. They usually head for a field that’s close to their nest, so that’s where I concentrate my hunting. These areas are also usually near good strut zones, which are places where the gobbler can do his display thing, be seen from a long distance, and yet see any approaching danger from a long ways off, too.”

Once he gets near a known or suspected strut zone, Dampman slows down even more. “You don’t want to bump any birds ahead of you by moving too fast,” he said. Then he looks the situation over before deciding what to do.

“If the birds have not reached the strut zone yet, and if I’ve done my scouting, I know they’ll get here eventually,” he said. “If I have time, I like to set up a decoy spread. Often I’ll use two hens and one Jake, or sometimes just the two hens. With only one decoy, a gobbler will sometimes stand across the field and try and get the hen to come to him. But with a group, more times than not he’ll come to the decoys instead.

“Another key to spring hunting during all hours is to not waste time hunting where there are no turkeys,” he said. “That may seem obvious, but lots of people overlook that simple fact and spend lots of time in country where the chances of turkeys hanging out is really pretty low. You have to learn their habits on a specific piece of ground – where they roost, strut, feed, water, and preferred travel routes. The more you know about the area, the better your chances of success.”