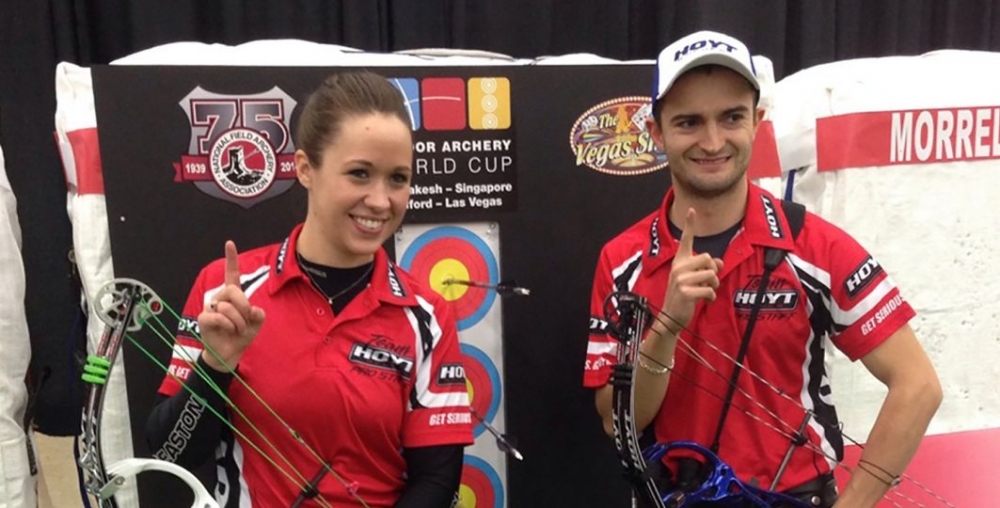 The powerhouse team from Korea flexed their muscles yet again at an Indoor World Cup.  This time they took the top four places with PARK Se Hui bringing home the gold, CHANG Hye Jin silver, and KIM Yu Mi the bronze.  This Indoor World Cup season has shown that the Korean women are not just dominant outdoor but now shooting indoor as well.

This division showcased Olympians from three different countries.  One of the London Olympic finalists, Rick Van Der Ven, met team Olympic silver medalist, Brady Ellison, in the semifinals that came down to a one-arrow closest-to-center shoot-off where Rick won with a ten over Brady’s nine.  Rick carried his ten shooting ability over to the gold medal match against Italian, Matteo Fissore, where Rick beat Matteo decisively six sets to two.  The bronze medal match between two Americans ended with Brady Ellison beating Brett Lazaroff seven sets to one.

There were a couple of minor upsets early with the number five seed, Jamie Van Natta, and number six seed, Linda Ochoa, losing in the first round.  However the top seeds all survived to shoot in the medal rounds that had the number one seed, Erika Jones, versus number two seed, Crystal Gauvin, for the gold.  Erika continued her dominance following her stage wins in Singapore and Telford with a finals victory in Las Vegas.  She shot a perfect 90 to claim a six set to zero set victory over Crystal.

The tightest division from top to bottom showed th­­at any one of the 16 qualified archers could win.  The #15 seed, Sebastien Peineau, proved just that, by upsetting the #2, Mike Schloesser, in the first round and steam rolled his way to the finals.  The gold medal matched featured the number five seed, Braden Gellenthien, versus #15 Sebastien Peineau.  The Frenchman was unstoppable en route to the gold, Peineau shot eleven straight tens before missing his final arrow to seal his victory over the American.