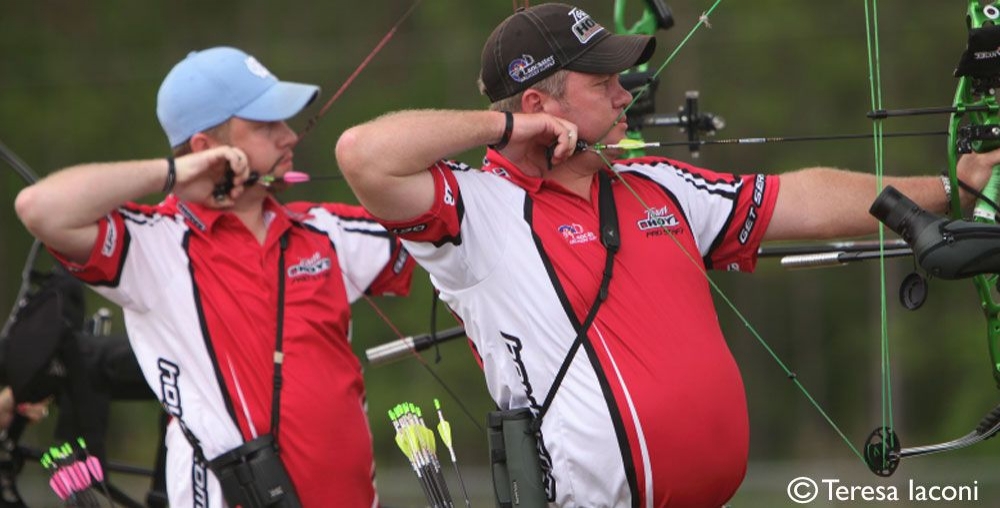 Newberry, FL – In a surprise upset at the Easton Foundations Gator Cup, Alex Wifler (IA) won his first ever senior title at a USAT Qualifier Series Event, taking a 6-2 victory against Canadian Olympic Team member Crispin Duenas, on a field that had some of the country’s (and Canada’s) strongest archers competing.

Wifler overcame several tough opponents in his earlier matches, including Olympic hopeful Matthew Zumbo (CA), Chris Webster (AZ) and Resident Athlete Jeremiah Cusick (CA) to reach his match with Duenas, who had to content himself with a silver medal. “I thought it was pretty fun,” the gold medalist recounted. “It’s my first tournament shot with adults…I just did what I normally do. I was just shooting. I just came here to shoot, and that’s what I was doing.”

The other upset in the men’s recurve matches came in the bronze final, when Cusick came back from a 1-5 deficit versus Canada’s Phil Arsenault to win the match and the medal, 6-5 after a one arrow tiebreaker. When asked about the match, Cusick said “I just told myself to shoot strong shots, and not worry about what he was shooting. I just worked on my follow through and it worked in my favor.” When asked about how he’s currently training, Cusick commented: “I made a couple of form changes recently, [including] better posture. I went down in bow weight, so there’s a little more control now.”

The gold medal match came down to a very close one arrow shoot-off, which Johnston took with a closer “x,” 142-142, giving Anschutz the silver. In the bronze medal match, Cochran was able to fend off Keller with a three point win, 144-141. When asked about the pressure of facing Van Natta in the quarterfinals, Cochran said, “I just wanted to make strong shots and work on form. I don’t look at the other archers, I just try to focus on my own shooting.”

The recurve women’s group saw the current top ranked Olympic hopefuls – Jennifer Nichols (TX), Miranda Leek (IA) and Khatuna Lorig (CA) rise to the top, along with Canada’s Virginie Chenier. Following a 6-2 semifinal win versus Lorig, Nichols moved to the gold medal final, where she met Leek, who came from behind to win versus Chenier. In the bronze medal match, Lorig prevailed with a four point margin, 6-2 for the bronze, while Nichols and Leek had a back and forth battle that Nichols ultimately won, 6-4.

It was an all-Wilde gold medal matchup on the compound men’s side, when brothers Reo (ID) and Logan (UT) ended up facing one another after semifinal victories versus Garrett Abernathy (SC) and Ben Cleland (OH), respectively. In the final, Reo took an initial lead and never looked back, increasing the gap to 149-143 for a six point gold medal win, with Logan taking silver. For the bronze medal, it was an even closer match, with Abernathy winning the bronze, 148-146.

The winners of today’s finals were awarded checks thanks to a prize money grant from the Easton Foundations and USA Archery which affords $1000 for first place, $500 for second, and $250 for third, to winners of the four major senior categories at each USAT Qualifier Series Event.

Results for all categories can be found by clicking, here. USA Archery’s events continue on Monday with the second nomination shoot for the U.S. Olympic Team Trials, and the next USAT Qualifier Series Event is the Nor’easter, June 8-10 in Canton, Massachusetts. For more information, visit Team USA’s Archery Events.