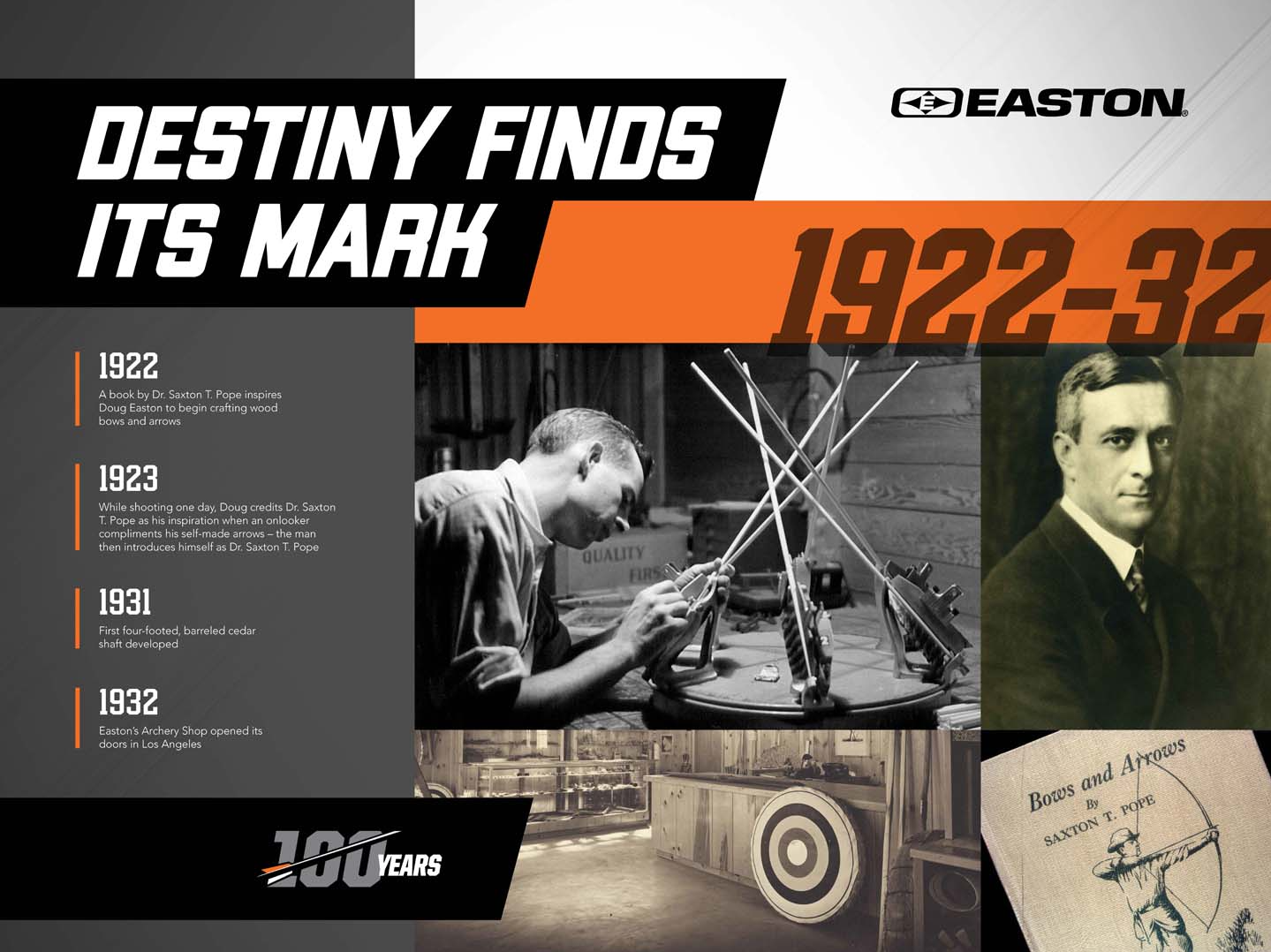 SALT LAKE CITY, UTAH — Easton, the longest standing archery company in the United States is proud to celebrate their 100th anniversary. Easton’s inception began with a family name, and today is still a family-owned company focused on its legacy and the future of archery.

Founded in 1922 by Doug Easton, who began crafting his own bows and making arrows out of cedar and pine. By the time he was 17, his craftsmanship was renowned in target archery, and his arrows were regarded as the finest in the country. In 1929, Doug moved to Los Angeles, opening Easton’s Archery Shop, where he would hit the sport full force with a host of wood-arrow innovations — the first screw-in point system that would become the world standard, then in 1949, with the production of the world’s first aluminum arrow, the 24SRT-X. Archery would never be the same.

The small family shop moved and grew. Over the next decade, Doug and team created the venerable XX75, the best-selling arrow shaft of all time. Jim Easton came to work for his dad in 1960, and his engineering mind expanded the company to new altitudes with ski pole shafts, and higher still, with the development of the thermal shaft for the seismometer used on the Apollo moon landing. Then came a sequence of game-changing launches — aluminum baseball and softball bats, aluminum-carbon hockey sticks, new frame technology for road and mountain bikes, and durable, aluminum drumsticks.

Doug Easton was laid to rest in December 1972. But his legacy lived on with his son, Jim, and his grandson, Greg Easton, who would help pioneer virtually every major advancement in arrow technology to this day. Under Jim and Greg’s leadership, the introduction and evolution of aluminum carbon AC hybrids would be the next innovation to dominate and sweep the Olympic podiums. And today, with the small-diameter carbon revolution that’s redefining target and bowhunting success across the globe.

The powerful draw of the sport, and the relentless push to innovate couldn’t make history without the millions who put their trust in Easton and share our singular aim of excellence. Of all the honors and achievements, archers are what keep Easton looking down-range, since 1922 to the next 100 years and beyond.

Since its beginnings in 1922, Easton Archery has focused on offering innovative, high-quality products that enhance the end-user’s sporting experience. Easton revolutionized the sport of archery by introducing straight, consistent aluminum arrows in the 1940s, and has been the world’s leading archery innovator ever since. As the world leader, Easton shafts are used by more bowhunters, crossbowmen, 3D competitors, target shooters and Olympic archery competitors than all other brands combined.