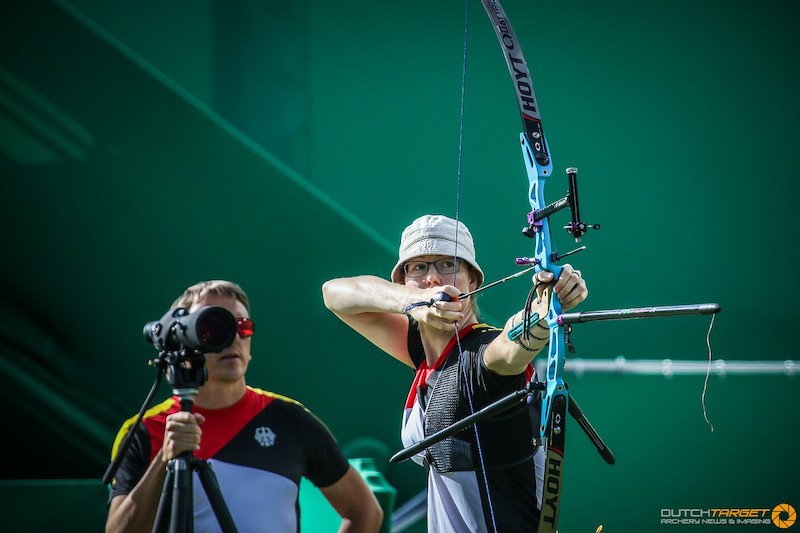 Easton offers three major arrow shaft design technologies for target archers-Parallel shafts, tapered shafts, and, at the top of the product line, barreled shafts.  Each of these technologies offer performance advantages for specific purposes.  Let’s discuss these and get a better understanding of the place each of these has in Easton’s designs.

Parallel-design shafts are the most common, most available, and, because they are easier to build, least costly type of arrow shaft design produced today.  Well suited for all-around use, parallel designs in either aluminum or carbon have the advantage of easily available, standardized components, and little guesswork when it comes to setup and tuning.   Because there are fewer manufacturing steps needed, parallel shafts can be made much more inexpensively than non-parallel shafts.  Shafts such as the Easton ACG and the new ProComp compound shaft provide very good performance at an affordable price.

However, the main reason parallel shafts ARE parallel has as much to do with the expediency of manufacturing and production as with the ultimate performance of the arrow shaft.  Because parallel shaft designs have more mass at the front and rear than otherwise equivalent tapered or barreled designs, they have more inertia at the ends- particularly the rear end- potentially decreasing clearance for finger shooting.  The parallel shaft also has more surface area, and presents more cross section to side winds, compared to other designs, potentially increasing wind drift.  One can certainly obtain excellent performance from parallel shafts, but there are demonstrably better alternatives, alternatives that can help accomplished shooters score better than with parallel shafts, in certain situations.  These include windy conditions, longer distance shooting, and slightly variable (in other words, human) release techniques.

For improved performance, especially in an outdoor environment, we must turn our attention to barreled, and tapered shafts.

The tapered shaft concept is thousands of years old.  Ancient archers knew that by tapering the rear of the shaft and maintaining a bigger diameter in the front of the shaft, the arrow had better performance.  For one thing, the tapered shape slightly reduces drag while producing a higher front-of-center balance with equivalent overall weight.  But most of all, for a finger shooter, a correctly designed rear taper can provide a more forgiving behavior in the event of small release variations.

These advantages might be why ancient examples or evidence of tapered shafts can be found in nearly all cultures, even though they likely did not fully understand the physics behind these advantages.  Tapered shafts have two distinct “spine zones” which can be tailored for specific behaviors.

Today, specialty designs such as the Easton X10 ProTour have been introduced with a reverse taper- with a more aerodynamic front, an overall smaller profile, and much stiffer rear portion, for better compound bow launch and downrange performance.  This design was proven by being used to set most of the existing compound bow world records, and to earn the vast majority of medals, from the time of its introduction a decade ago, through today.

While there are advantages to the tapered shaft, there are some trade-offs.  The main drawback of tapered shafts is the increased cost of production and difficulty in maintaining consistency, and therefore, the higher price, compared to parallel shafts.  The technology needed to taper an arrow shaft isn’t particularly complex- but on the other hand, maintaining excellent spine and straightness standards for a complete set of tapered shafts- much less every single one produced- is technically challenging and quite expensive.  In fact, this is where most of the added cost comes from.

The upshot is that the front-tapered shaft is, so far, the ultimate in performance for compounds shot with a release device.  Compounds don’t benefit from a more compliant rear shaft portion.  Finger shooters benefit more from a rear taper, which is more forgiving of minor release variation, and being lighter in mass, clears better on leaving the bow.  Notably, in the years before introduction of the ProTour, top compound shooters would use X10 Shafts with all or nearly all the rear taper portion removed.  Reo Wilde, among others, used this configuration to set numerous world records and win numerous World Archery world champion titles.  The ProTour was largely developed with this experience in mind.

As good as tapered shafts can be, in some particular uses- specifically, finger release- a barreled shaft- which has three separate “spine zones”- can offer even more advantage.

Like tapered shafts, barreled shafts are a concept dating to antiquity.  The legendary flight archery accomplishments of the Ottoman sultans, for example, were all accomplished with barreled shafts.  Simply put, the barreled shaft is the most efficient design for longer distance archery.

In the 1920’s Doug Easton created barreled target shafts from eight pieces of intricately laminated wood, with a denser heavier wood making up the front of his elegantly crafted arrow shafts, and the back 2/3rds of the arrows made of straight grained, laminated cedar.  So much painstaking hand labor went into a matched dozen of such arrows, that the price was equivalent to up to a month’s wages at the time.  Hunting arrows of the day, used at closer range and no doubt more prone to loss or damage, were also composed of two different densities of wood, but were typically parallel in design and .  But the barreled shaft was widely demanded, partly because doing distance shooting was the order of the day for target archery- in fact, even more than today.  At the time, competitions were shot with 72 arrows at 100 yards- 91 meters- 48 arrows at 80 yards or 73m, and 12 arrows at 60 yards or 55m.  (Obviously our forebears in the sport were a tougher lot than we are today!!) Barreled shafts could easily be demonstrated to clearly outperform parallel designs, even with the relative accuracy standards of the time.

In the 1970’s Easton created barreled X7 aluminum arrows, which were proven through testing to be superior to parallel shafts.  Unfortunately the cost of producing a barreled aluminum shaft with a constant wall thickness and good tolerances proved to be too high for viable production.

In 1982, Jim Easton created the first carbon arrows, the original Easton A/C.  This shaft was a parallel design and pushed the limits of technology at the time.  These were used to win the 1984 Olympic Games.  Their chief advantage was lower mass, providing good FOC balance, and substantially smaller diameter than the aluminum shafts of the day.

In the late 80’s Jim Easton devised a method to improve on the parallel design, and create a barreled Aluminum-Carbon shaft- this became the A/C/E,  introduced in 1987 and used by Jay Barrs to win the 1988 Olympic Games, as well as to set multiple world records of the time (some of which lasted more than 20 years).

In 1995, after several years of studies and testing, Jim and I designed the Easton X10 to build on our experience and leverage some then-new theories regarding the interaction between the bow and arrow- in particular, for the first time since the introduction of the carbon arrow, deliberately using a heavier shaft to perform better at longer distance.  It seems to have been the right direction, as the X10 has been used to win every Olympic title (and was used to set every outdoor recurve world record) since 1996.

By making the rear half of the shaft less stiff and much lighter in mass than the front or the center, clearance for finger shooters is improved from recurve bows.  This characteristic also makes small variations in finger release much less of a problem. By shifting the shaft balance point forward, front of center balance is improved, which allows for improved wind performance from the arrow shaft.

The optimized mass of the X10 works better at modern recurve lengths, providing for a better frequency match between the arrow and bowstring, which is important at the moment of separation from the string and has a significant effect on accuracy.  The optimized mass also retains more energy and improves arrow performance downrange.

Of course, this ultimate performance also comes at a price.  It is much more difficult to build a barreled shaft with excellent tolerances than either a parallel or a single-tapered shaft.  A tremendous investment in technology and considerable experience is needed to successfully build such arrow shafts consistently.

Tolerances all along the production process must be held to a much higher standard, material selection and specifications must be made much more tightly, and the fundamental behavior of a barreled shaft means that each and every spine size needs a custom designed materials callout, shape and flex pattern.

Proper selection and tuning of barreled shafts does require an understanding of tuning and the ability to take accurate measurements of draw weight, draw length, and other parameters.

The barreled shaft is currently the ultimate design for accuracy and performance for recurve finger shooters, proven by thousands of archers around the world.

There are pros and cons to each design- parallel, tapered and barreled.  Parallel shafts balance performance and price, while tapered shafts provide specific benefits to both compound and recurve shooters, though these are opposite in terms of implementation.  Barreled shafts provide the most benefit to finger shooters, and represent the pinnacle of performance, but at a considerable increase in cost.  Easton provides options at various price points and performance levels to accommodate all shooters.