The really nice part of game cameras is that it allows you monitor several places at once.  Over the last two months, I have had 3 cameras out collecting photos on the 3 sites I identified in May.  Every two weeks or so, I have been revisiting the sites to replenish the Nutradeer mineral as well as to check the cards to see what photos we have been getting.  One of the things I like to do when I check my game cameras besides looking at the animals is to analyze the time stamp data on the photos to look for patterns in activity that will maximize my odds to be successful.

One of the tools I use to do this is a simple spreadsheet.  I build the spreadsheet to show each hour in the day across the columns at the top and the dates are each on individual rows.  As I analyze the photos, I mark off the corresponding date and time that my camera took a photo.  If an animal walked in front of the camera during that hour, it is captured on the report.  After you have a month or two of data, a very easy to understand and visual pattern will emerge.  I have also done some quick math to give me the percentage probability of seeing animals over a particular area at any time of the day.  For me this is especially in choosing the best area when considering between multiple areas.  After reviewing the chart for all three sites, I selected the one site that had the most animal traffic during legal hunting hours.  You will see that for the month of July the site that I have chosen to hunt has the following statistics: 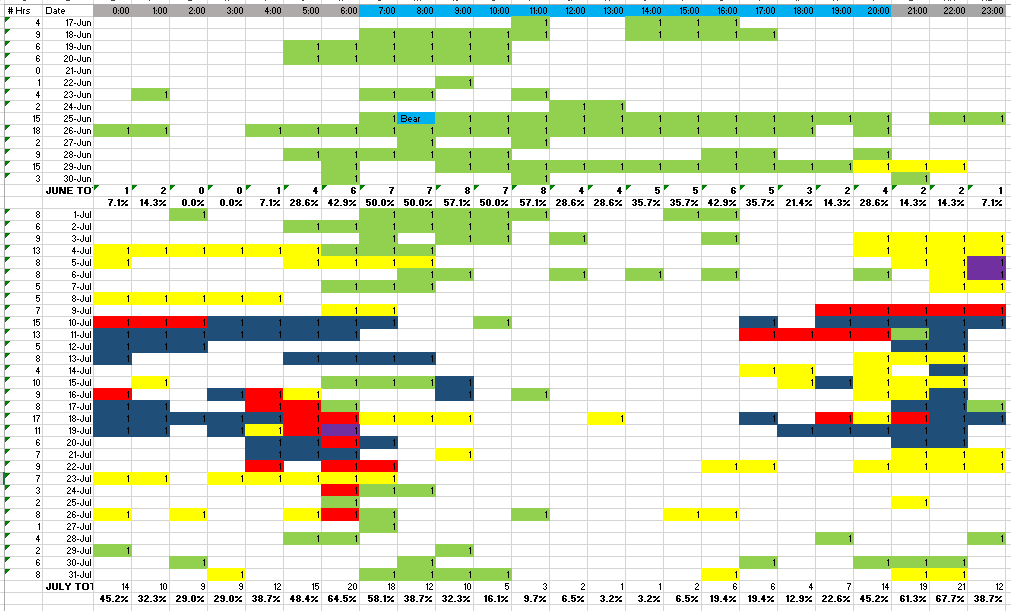 Now I realize that past behavior is not necessarily going to predict the future, but for me, it helps to manage my expectations so that I can at least know what I might expect so that I don’t get discouraged if I don’t see anything come by my stand right away on day one.

With the site selected, I now need to select my spike camp location and get water and my tree stand up to the area and set up prior to the hunt.  For this hunt, we are using the Millennium aluminum tree stands.  My personal favorite for backcountry hunting is the Millennium M7 Microlite.  This stand weighs less than 10 pounds, has a comfortable seat and is really easy to set up.  After packing it and 7 gallons of water in, I returned the a few days later with the ladder steps to find a tree and get everything hung and the tree trimmed out.  I like to locate the stand downwind and 20-30 yards from the anticipated shooting area.  I personally like my stands to be about 15 off the ground with good cover behind me.  Lastly, when positioning the stand, I prefer to not point the stand in the direction I plan to shoot.  I have had experiences where I draw straight back into the tree and makes for an awkward shot, so I prefer to turn the stand platform slightly to either side to allow for a more natural and comfortable shot.

Our spike camp is set up high on the ridge above where we will be hunting.  Because elk on public land often times are silent during the day, they are often more vocal and will often respond to a call at night.   It’s important for me to be close enough to where I can hear the elk in the hunting area at night as knowing their nightly location is helpful in determining the next day’s game plan.  I also want to locate my camp in such a way that getting to and from the stand is as least impactful to the animals as possible but also keeping it in a safe location with respect to noise and wind.

In this particular area, we are not anywhere near the water, so whatever water we need, we have to pack it up in advance.  I will do this the last time I go in to check cameras right before the hunt.  One trick I have used successfully in the past is to tie up a large tarp between some trees and allow the rain to collect into it.  A 12×12 tarp can easily collect enough water for a week-long hunt in just one rain storm.  You can then easily filter what you need.  This was a lifesaver last year when my tarp contraption captured 15 gallons of water in just two days.  With my stand now complete, our camp site chosen with water on-site, we are now ready to pack our bags and go hunt.  My next post will detail my gear list and my process for keeping my pack as light as possible.

Bowhunting for kids – Bowhunter Base Camp