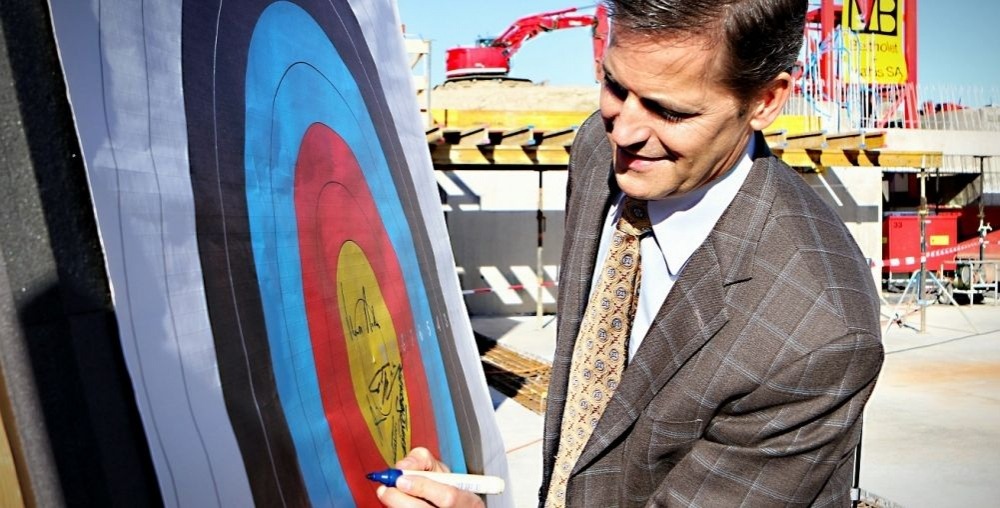 Lausanne, SUI; 09 April 2015: World Archery President and IOC member Prof Dr Ugur ERDENER laid the first stone of the World Archery Excellence Centre in the Olympic Capital of Lausanne, Switzerland, today. The Centre, currently under construction, is set to become a hub for the development of Olympic, elite and recreational archery worldwide.

Facilities will include indoor and outdoor ranges for international athletes to train for major international, multisport and World Archery events – including future Olympiads – and a state-of-the-art gym. The Centre will also host courses for the sport’s technical officials and coaches in its conference facilities.

IOC President Dr Thomas BACH has been a strong supporter of the project. During his speech at the ceremony he said:

“Archery is one of the most ancient sports, but it has also been an innovator throughout its history and that is shown here at this centre once more.”

“We are looking forward to see many future Olympians and Olympic and Youth Olympic Champions prepare here for Buenos Aires, Tokyo and beyond.”

Greg EASTON, Easton Foundations President, said “My father’s vision for archery as a sport for all continues to be fulfilled by events like today’s stone-laying here in Lausanne, the Olympic City.  We are proud to continue to help build a legacy for our sport that will see it into a bright future”.

The Easton Foundations continues to support and build archery and multisport training facilities, both unilaterally and in partnership with municipalities.  Currently, world-class facilities are fully operational in Newberry Florida, Salt Lake City, Utah, and Yankton, South Dakota.  The Easton Foundations newest facility, a state of the art indoor and outdoor Olympic-class training center for archery, will open in Chula Vista, California, this autumn.