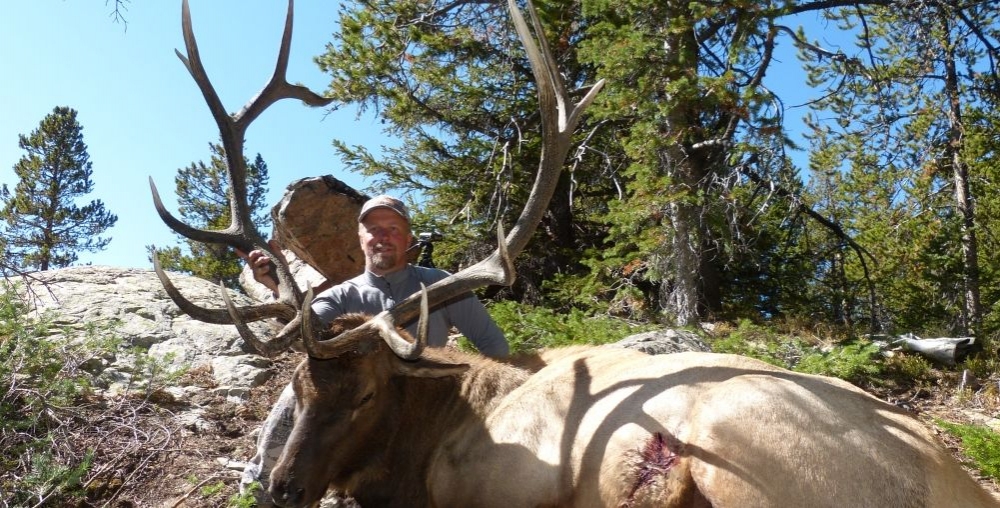 Any sportsman who has made the trek to Wyoming to hunt or fish knows that it is an absolute paradise.  The residents of Wyoming know this all too well and are probably cursing me for disclosing such prized information.  The benefit for the residents is that they have this playground as their backyard and the benefits of watching the animals year around.

Being a nonresident from Southern Utah puts me 5 hours from the southwestern border, of Wyoming, but 12 hours from the Bighorn Mountains, which is one of my favorite areas of the state.  The publicity of the southwest corner of the state draws many people there, but I’m not a fan of crowds and I get my share of them in Utah.  The grizzlies haven’t made their way back into the bighorns like they have in the Yellowstone area and only limited wolves have trekked across the plains into this mountain range, which makes it a game rich environment with limited predators.  However, it is still 12 hours from my house and with a lot of wilderness within this mountain range.  A nonresident must have an outfitter to hunt the wilderness area.  A good outfitter is the way to go when you want to get into the backcountry and away from the crowds as well.

This was an easy decision for me on choosing an outfitter.  I had travelled to Buffalo, Wyoming several times in the previous couple of years to hunt with A Double J Outfitters for archery antelope and late season whitetails.  Both were excellent hunts with a lot of game and owners Chris and Rusty are some of the best people I have ever met.  They go out of their way to make sure that everyone has the best hunt possible.

During my late season whitetail hunt, I had the pleasure of seeing 39 bull elk on our first morning in the field and one of them was a whopper 370” class bull.  I knew that I would be spending my precious bonus points for elk in this region after that experience.  I had one point short of maximum bonus points going into the 2012 draw and my good friend Erik Christensen was holding the same.  Erik helped run an extremely successful guide operation in Utah for many years and he is a true “elkoholic.”  I’m pretty sure that there isn’t anyone out there that I would rather have in camp with me when it comes time to go after big bulls.  He cut his teeth on some of the biggest bulls Utah has to offer and I knew we would have a great time in camp.  Since Erik had been guiding for so many years, he was happy to be the hunter and jumped at the invitation to go to Wyoming if we drew.

We were pretty much a shoe-in for the draw, but anticipation always builds for that day when the draw is posted.  Sure enough, our extra dollars for the “Special” tag paid off and we had drawn premium elk tags for the 2012 season.  I called Rusty to confirm our plans and he was almost as excited as we were.

September finally arrived and we made the twelve hour road trip to Wyoming.  We met with Rusty and his crew at the main lodge outside of Buffalo and immediately headed to the mountains for our first day of hunting.   Rusty made the call to hunt close to the main camp the first day due to the fact that there was a herd bull living around the base camp which made an occasional appearance.  He was a 350” class bull the year before and should definitely be bigger this year based on earlier summer sighting.  We hunted hard on the opener, but not much noise and very little fresh sign.  We opted to leave the comforts of the main camp and pack into back country where the preseason scouting had yielded the quality of animals Erik and I were looking to put our tags on.

Arriving at the trailhead was a total shock because there wasn’t another horse trailer in the place.  Could we possible get the whole area to ourselves?  It took the better part of the afternoon and evening to get into our target location and get camp set up, which left no time for an evening hunt.

The next morning, we headed to one of the highest points to glass the area and see if we could find a bull in that 340-350” class.  There seemed to be elk in almost every open park, but cows and raghorns were the norm.  Erik finally picked out a big frame bull several miles away and it was off to the races. We had closed the gap to just about a mile and Erik made one last look to mark the area prior to dropping into the thick bottoms and up the other side.  “Crap, there is another hunter”, was his comment.  How could we be six miles into the backcountry and now have competition on top of the only good bull we could find.  We shed some clothes and made a run for it, but unfortunately, the wind gave the other hunter away and blew out our shooter with all of his cows.  He was a great 6×7 that was pushing the 350” mark and definitely what we were looking for on this hunt.  We spent the rest of the afternoon trying to turn him up on the other side of the valley, but kept having run in’s with smaller bulls.  Exciting, but not the caliber of animals that we were after.

We decided to split up for the next day because, camp cook and guide, Chad Franklin could help Erik and Rusty could help me.  Covering more ground would be beneficial when looking for a true trophy.  Rusty and I covered 13 miles during the day and had four different bulls well within shooting distance and one was a 320” class bull at seven yards.  A chorus of bugles caught our attention as we were working our way back to camp.  It sounded as if there were at least a dozen different bulls sounding off.  As we closed the distance, we started seeing bulls out in the open, but zero cows were to be seen.  We had a total of 8 bulls visible and even though they would all respond, nothing would come closer.   As light was fading, the big 6×7 appeared and I forgot about every bull on the hill.  I was sprinting towards the big bull as 8 other bulls watched with confusion on their faces.  I’m sure Rusty and the bulls thought that I was crazy or just didn’t know what I was in the low light.  As I crested the roll in the hill, the bull we had named Kickstand was standing broadside at 108 yards screaming at another intruder.   He was running off another 5 point bull, but I still had yet to see a cow.  We ran out of light before kickstand presented himself again.

We called Erik and Chad on the radio to tell them of what we had seen and they notified us that they were just finishing caping Erik’s bull and getting the meat ready to pack out.  Back at camp, we shared the stories of the day and Erik told us about the excitement of his hunt.  His bull put on quite a show and tempted him just a little too much at 30 yards to pass on this overall experience. The Deep Six Injection arrow did its’ job well and the bull piled up at less than 90 yards.   I was happy for Erik’s success, but even happier to know that I would have him in my corner in the morning when we went after kickstand once again.  Erik told me that he had Kickstand at 50 yards, earlier in the day, but couldn’t get a shot.  He said that he has an extra point on both sides, but I was sure that wasn’t the case.

The next morning, we were on the ridge above Kickstand’s last sighting the night before.  We started a chorus of calling that lit up the valley like the 4th of July.  Elk were bugling everywhere and one raspy bugle sounded very familiar.  We closed the gap to a couple hundred yards and set up to work them with the calls.  Just as we were about to give up on our setup and go on a major offensive, one last bugle said that he was committed and closing the gap.  Erik had moved up the hill to draw the bull past me broadside and as I saw legs appear through the trees, I came to full draw.  I held for over a minute waiting for the standoff to end and the bull to move up the hill.   Elk materialized, but it was a cow and a calf.  I was about to let down when the roar of a bugle at 40 yards jerked me back to full draw.  I settled in for a shot as the huge front end of a bull materialized as he came up the hill.  He had the kicker on the left side and I knew that it was Kickstand and I was going to get my chance.  I mewed with my mouth as he crossed my opening and I dumped the string all in one smooth motion.  As the big bull whirled, I saw the shot hit the mark, but I also saw an extra bigger kicker on the right in the same place.  This wasn’t Kickstand, but better yet; Kickstand’s grandfather.  He had a huge frame and the excitement overwhelmed me thinking about what we had just accomplished.

We found the Easton Deep Six Injection arrow immediately and it had great blood, but we knew because of the angle that I would have only gotten one lung and the liver.  We gave the bull a full hour to expire as we shared the moment together.  The bull had only gone several hundred yards when he lay down in what should have been his final resting spot, but apparently we should have given him more time. As we approached, he blew out of his bed and left not a drop of blood to follow.  We went from being on top of the world to absolute disappointment.  We gradually grew our circle looking for my bull and two hours later, Rusty broke the silence of the valley with a loud, “Mike, I found your bull!”  I ran straight to him and was I ever shocked.  He was a true monarch; seven points on each side and less than 4 inches of total deductions.  He green scores 377 4/8” gross and is truly one of the best bulls Wyoming has to offer.