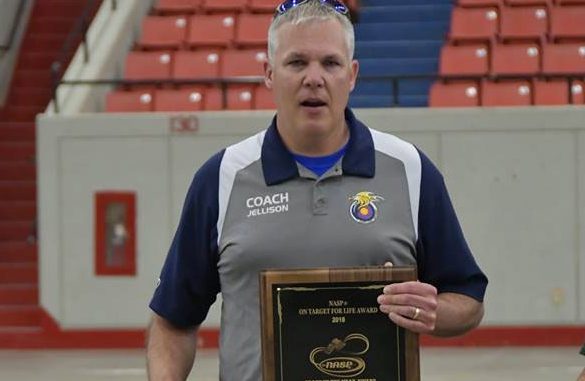 For the past three years, the National Archery in the School’s Program (NASP®) has accepted nominations for a coach/educator, that has displayed excellence and the utmost dedication to their students and NASP® team, to be named NASP® Coach of the Year. This year’s nominations resulted in Robert Jellison, from Hartland, Michigan being awarded the title!

Archery has been a part of his life from an early age. He has been an avid bow hunter his entire life. “When I was able to hold a bow, my parents and grandparents had me shooting a right-hand Fred Bear recurve. I was told if I could hit a paper plate, then I could go deer hunting. That’s all it took! I practiced hard until all of my arrows were in the plate.”

It’s no doubt that Jellison channels that innate dedication from hitting that paper plate to his present student archers with all the winning titles they’ve received at NASP® tournaments over the past few years. In 2010, Jellison’s archery team finished in 32nd place, in 2011 they finished in 16th, and in 2012, 9th place. He said, “Being in the top ten was a great feeling.” By 2013, “we almost made the podium” as his team came in 4th place. According to Jellison, his team kept setting huge goals and each year they achieved those goals. By 2015, the Hartland archery team finished in 2nd place, and a year later, they brought home their first national championship.

The National Archery in the Schools Program is renowned for helping kids achieve academic excellence, elevated confidence, and life long friendships, but without outstanding coaches, educators, and supportive parents and family, it would be hard to achieve such a reputable status.

For more information about the non-profit NASP®, please visit www.naspschools.org or our NASP page.