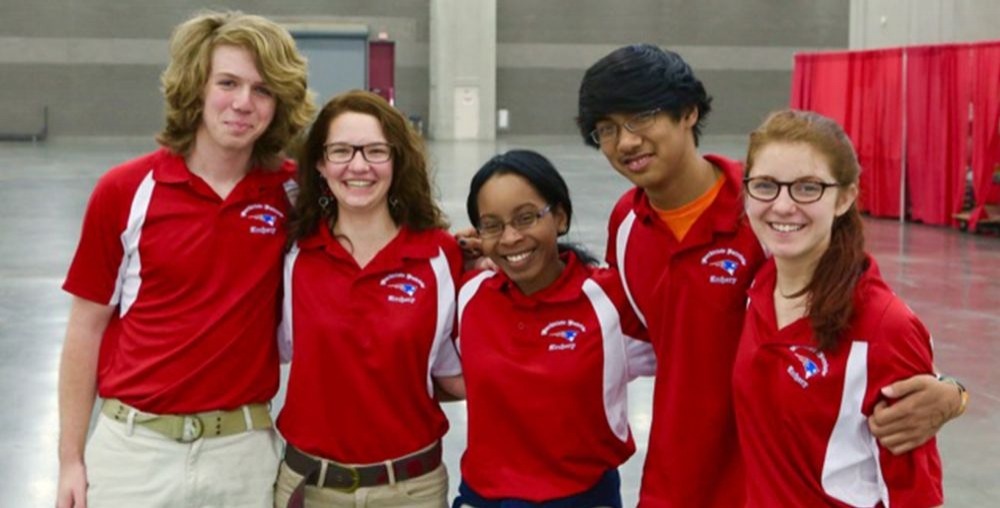 From Prince of Wales, Alaska to Washington DC, student archers, coaches, friends, and family descended upon Louisville’s Kentucky Exposition Center this past May 6-9.  The draw for these archery enthusiasts was the 2015 NASP® United States National Tournament.

By the end of the three day competition, 12,045 young archers from 763 schools in 42 states and Washington DC had surpassed NASP®’s 2014 world record of 10,443 archers. This is an increase of more than 15%.  One world record in three days wasn’t enough for these 4-12th grade students!  Once they shot in the bulls-eye competition, 2,841 of them made their way over to the NASP®/IBO 3D Challenge contest to also reset the world 3D record which had been longstanding at 2,450 archers.

The tournament’s top male archer was eleventh grader, Miles Wilson from Alma Bryant HS in Irvington, Alabama. He posted a near perfect 298 out of 300. Eighth grade student, Sophie Kleinman from Louisville’s Crosby Middle School placed tops among lady archers with an equally impressive 297.

While many individuals win awards at NASP® tournaments, teams play a dominant role throughout the event, including awards.  First place teams in each of the three divisions were; KY’s Trigg County High – 3,441, OH’s Logan Hocking Middle – 3,397, and KY’s Shopville Elementary – 3,239 points. A perfect score would be a team’s top 12 archers scoring 300 each or 3,600 team points. By rule, each participating team must contain at least four archers of both genders.

After the competition it was time for what many believe is the highlight of the tournament, the scholarship shoot-off.  As more than 2,000 spectators and peers look on, each of the top five male and female archers shot again. They shot five arrows for practice and then five for score at 15 meters. Based upon the results of the shoot-off $105,000 in scholarship cash is awarded. Bradley Long from Madison Central HS in Richmond, KY barely made the shoot-off. First he had to win a tie-breaker to see if he finished 5th or 6th.  He broke the tie and capped that off with 1st in the scholarship shoot-off for $20,000.  A junior in High School, Bradley told his mother, “Mom, I was thinking during the shoot-off that if I could win it you wouldn’t have to worry about college expenses, now you don’t.”

The world’s largest archery tournament requires nearly 175 adult volunteers to maintain safety, keep on schedule, and provide archer assistance when needed. Asked why he drives hundreds of miles to be apart of NASP® Nationals every year, avid archer Jim Hart of Lafayette, Indiana, said, “I love being around these thousands of happy kids.”  In fact, when surveyed, NASP® students rate “fun” as the top reason why they like archery, with self-improvement and competing with friends close behind.

Archery is truly a co-gender “sport”.  This year’s NASP® Nationals was comprised of 45% female and 55% male archers. This has been one of the most gratifying outcomes of NASP®. When NASP President, Roy Grimes, was asked why he thinks this sport is so loved by both boys and girls, he had this to say,  “We designed NASP® to be co-gender in order to help with Title IX participation issues.  We are pleased but not surprised, young ladies are equally capable and enjoy archery as much as young men.”  Sisters, Amanda and Ashleigh from Virginia encourage other students to strive to make it to nationals.  They advise, “You find out how you rank among other archers and get to see so many kids who also love archery.” Their father, Ed, says the entire experience from qualifying, fund-raising and traveling is a huge team and friendship building experience.”  Another father, Patrick Williams and his daughter Kendal, commented, “The experience of competing at this level provides benefits far beyond archery. NASP® Nationals instills poise, composure, and confidence among all who attend.”

Next for these US national archers will be the NASP® Worlds at the Music City Center in Nashville, TN July 23-25, 2015.  They will be joined by young archers among the other nine countries participating in the National Archery in the Schools Program.  Until then, Happy Shooting!

For complete tournament results and information about sponsors of the non-profit National Archery in the Schools Program go to:  www.naspschools.com