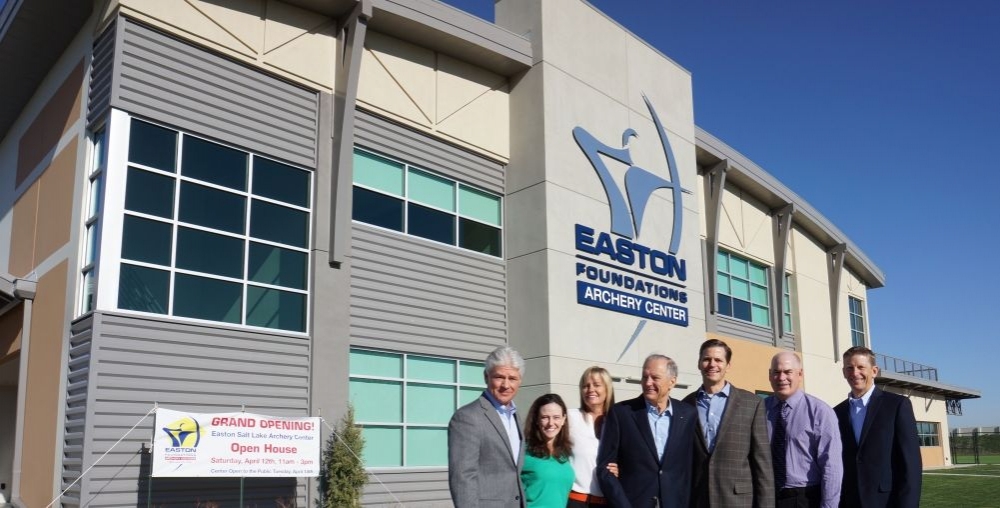 With a full 70M indoor facility, full 90M outdoor World-Cup capable, fully-turfed range, and a 28-target 3D/Field course, the facility also features sports medicine facilities, testing labs, training equipment, a gym, workshop facilities and much more.  It will also be home to the Easton Library, one of the world’s most extensive collections of archery books, artifacts and memorabilia.

The Easton Foundations are the world’s largest private benefactors to the sport.  Noting the growth of archery worldwide, the Foundations website points out its 2013 activities:

“To support this increased interest in Archery, the Foundations continue to fund a variety of programs and facility projects. As part of its grass roots efforts, the Easton Foundations funded $900,000 in grants to various Archery Camps, Clubs, Neighborhood & Youth programs, Parks & Recreation facilities and Schools and to the construction and improvement of archery facilities. The Easton Foundations maintains its commitment to prior grant recipients with donations totaling $1.7M to groups including NASP (National Archery in the Schools Program), JOAD (Junior Olympic Archery Development), NFAAF(National Field Archery Association Foundations), USA Archery, and US Collegiate Archery Association.

The Foundations also supported Archery directly with over $2.7M in funding to its OAS (Olympic Archery in Schools) program and to its existing Easton Archery centers and programs in Newberry, FL and Van Nuys, CA.”

The Easton Foundations continue to build more facilities for growing archery, with a multimillion dollar center opening in Chula Vista (adjacent to the existing Olympic Training Center) about a year from now.

Greg Easton, the President of the Easton Foundations and CEO of Easton, said:

“The Easton Foundation is excited to see the next step in our founder’s vision become a reality.  This Center is the first of its kind in many ways.  It will move us closer to fulfilling our vision of increasing archery participation and raising the skill of U.S. Archers by creating a seamless path from the introduction to archery through top-level training,” said Greg Easton, President of the Easton Foundations.  “We look forward to welcoming local, national, and international archers to Salt Lake City and working with our sister centers in Newberry Florida, Yankton South Dakota, Chula Vista California (at the Olympic Training Center), and our affiliated centers.”

“This new facility will provide a valuable resource for developing archery in our community and puts Salt Lake County on the map with archers from around the world, including, perhaps our future Olympians,” said Salt Lake County Mayor Ben McAdams.

“The new facility will enhance Utah’s ability to attract and host major archery events, including world cups and world championships that bring significant economic impact and media exposure to the state.  Utah has previously hosted the 2009 Youth World Championships, and World Cups in 2010, 2011, and 2012.

Jeff Robbins, president and CEO of the Utah Sports Commission stated, “Adding this premier facility to the list of Utah’s Olympic and other world-class venues, continues to diversify and broaden our sports infrastructure and helps us perpetuate the state’s sport and Olympic legacy strategy.”

YOU DON’T SEE THIS EVERY DAY…